What should a bunch of Austrian and European artists tell the USA about cars? The automobile nation No. 1 not only had a president but also a town car named Lincoln. And Austria? They don't even drive Austrian cars over here. They mostly drive Beemers, Mercedes and Volkswagen, which are cars made in Germany. But: The first ever built Porsche was put together in a Carinthian barn in Southern Austria just after World War II, the Porsche 356 No. 1 Roadster.

Therefore it is no coincidence that the group exhibition "We Marry Cars" in the gallery onetwentyeight in New York shows a video of a GT3 RS model in gold. Artist Johannes Langeder claims it is "the world's slowest Porsche." And you better believe him, because "We Marry Cars" not only plays with words but also with images and ideas. In case you want to look behind the curtains, it's a mock Porsche powered by a hidden bicycle.

"We Marry Cars" offers 17 perspectives of 17 artists on mobility, on transport, on the essence of movements and dreams. You will get the chance to listen to mixed tapes originally recorded on audio cassettes for cruising (franzthomaspeter). You will see photographs of "landscapes" (Norbert Artner) you would usually pass by in a car. And you will wonder about Leo Schatzl’s "Canopy" consisting of a protective car cover representing the space an automobile occupies in our environment. Continue with Daniela Gallées works defining territories, boundaries and the in-betweens. They might be able to open your eyes to new places and spaces.

Watch out! We-Merry-Cars. A-meri-ca. The onomatopoetic similarity is obvious. And astonishing. America would not be the same without the automobile. The title of the show also points out the various aspects of the car in society. Streets are not only becoming runways for our civilization but can also be a dead end. Did you forget about last year’s collapse of the automotive industry?

Speed and growth, the pursuit of happiness, independence, emotional highs and physical lows. You will be confronted with these byproducts of the car in paintings, graphics, film, photographs, video and installations. Come on in and buckle up! 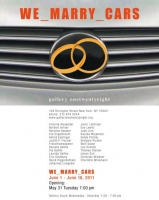